Through the Bible with Les Feldick
Newsletter

Time is flying by and we still believe that we are continually moving closer to our Blessed Hope, the Rapture. We pray you are all ready and have accepted our wonderful Gospel as expressed in 1 Corinthians 15:1-4. If you do not know it, read it and memorize it. It is on this we base our salvation and we want to see all of you here, there or in the air!

We have had many calls regarding how we fared from the flooding and tornados lately. We have been blessed to be spared any damage in our area. In fact, we have not seen a tornado since we moved here from Iowa in 1975. We also don’t have to worry about flooding because of our elevation. Many have lost their homes, business, farmland and crops, so please remember those in our area and across the country who are dealing with harsh weather. Our nation needs prayer in so many ways!

We also receive many calls regarding those who Les mentioned and were instrumental in the foundation of the ministry. You often see “the red head”, Sharon Martin, who did the majority of the closed captioning. She maintains a positive outlook and stays as active as possible, with the help of her husband Andy. Jerry Pool and his wife Lorna transcribed most of the books for printing. Lorna has since passed; please continue to keep Jerry in your prayers. Many things have changed since the beginning days of the ministry, but one thing that remains the same is that we are all family, even if not by blood. The girls continue to keep the mail sorted and the books printed, as well as all the other responsibilities, since Jerry Thomas & Hailey have both moved on.

As for Les and me, not much has changed in our health or routine. A bit of sadness is we lost our eight-year-old cat, Abby, recently. We miss her as we love all our pets. The highlight of our day is the time we spend in our swing (when the weather is nice) and reading our mail. We love spending time with family and were happy to get acquainted with our sixth great-grandson, Bowen, earlier this year. He was born April 2018 to our granddaughter Emily Nelson and her husband Joe and is our son Todd’s first grand. Todd and Kim also have five sons. Bowen is so sweet, happy and handsome, but as I’m great-grandma, I may be partial! Todd, Kim and the two younger boys were also here for a week in May as Todd was recouping from knee surgery. We enjoyed our time together fishing, hiking, playing dominos, and visiting in the swing.

Les celebrated his 92nd birthday on June 6th with a small party and chicken dinner provided by the girls in the office (Thank ya’ll so much) and I made a pineapple upside down cake. He has also received so many beautiful cards, kind notes, and many gifts as well. We are so thankful for these, and of course, your financial support and prayers. We couldn’t do it without ya’ll! Yes, I’m an Okie! 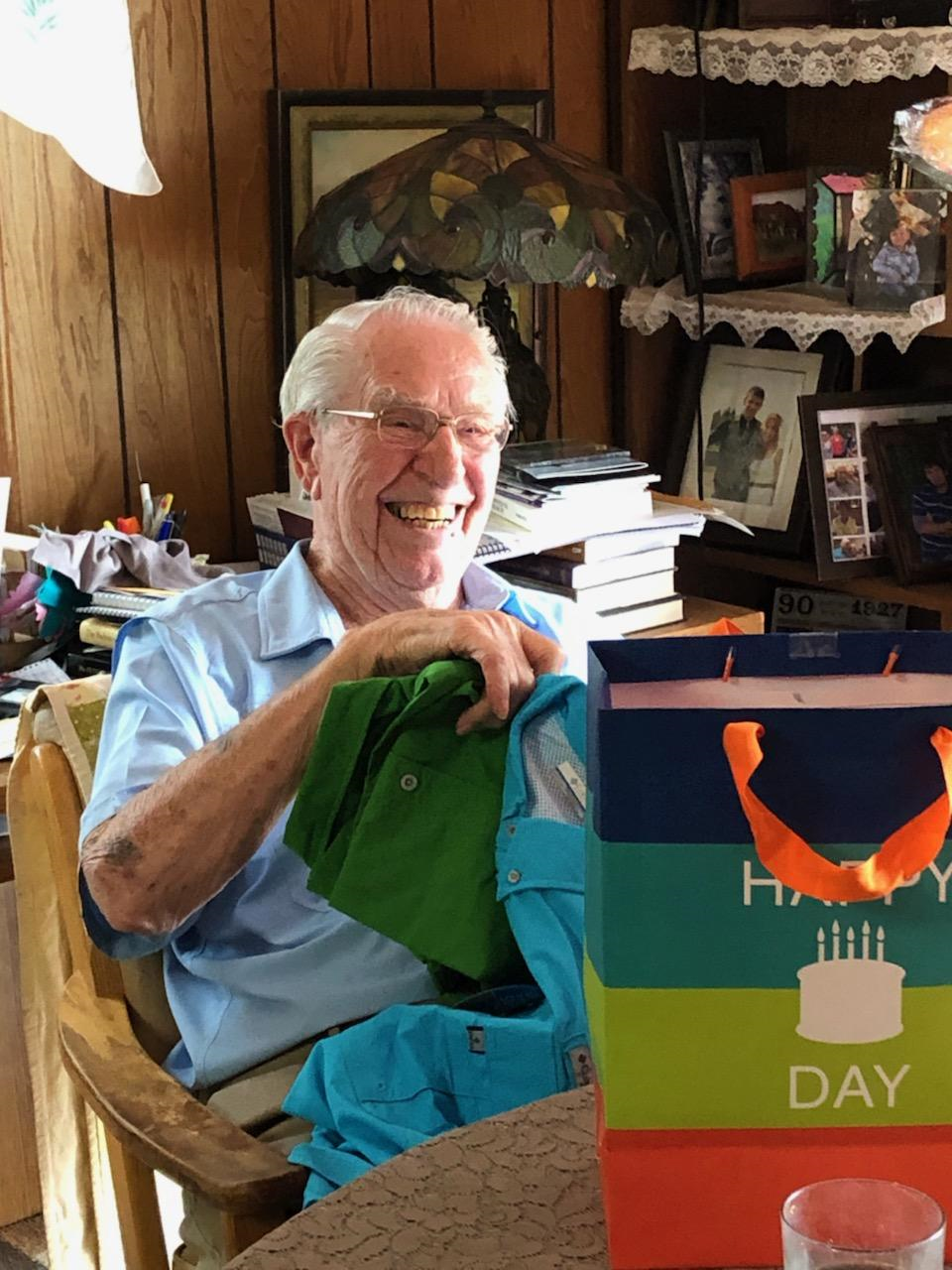 What in the World - Submitted with permission from Matthew McGee

Hello everyone. Part 1 of this article in the previous newsletter introduced four common sets of beliefs that people have regarding end times prophecy and the rapture of the church in particular. We also covered why neither the amillennial view nor the post-tribulational view are correct. In this Part 2, we continue with the mid-tribulational and pre-tribulational views.

Mid-tribulationists have no problem with the dividing of the sheep and the goats, the populating of the millennial kingdom, or the resurrection of tribulation saints. And by claiming that most of the worst plagues occur in the second half of the tribulation, they say their view is not in conflict with 1 Thessalonians 5:9 "For God hath not appointed us to wrath ...." But they are hard-pressed to defend their position against the following argument.

More reasons why the rapture cannot occur in the middle of the tribulation are provided in the pre-tribulational section below.

Merely by process of elimination? Not hardly. There are many reasons why the true Christians of this dispensation cannot be on the earth during the tribulation.

1. Israel is the focus of the end times, not the present church: During the Church age there are three classes of people: Jews, Gentiles, and the Church (1 Corinthians 10:32). Within the Church, there is no distinction between Jew and Gentile. During the tribulation however, God's focus will be on the nation of Israel. God will deal with Israel as Gabriel said in Daniel 9:24 "Seventy weeks (of years) are determined upon thy people ...." That is, Daniel's people, Israel. As discussed under the amillennial topic, the first 69 weeks have passed and one remains. In Revelation chapter 7, the 144,000 are all chosen from the people of Israel, and their tribes are listed. In chapter 11:7-8 the two witnesses are martyred in Jerusalem. In Revelation 12:6, the woman that flees into the wilderness for 1260 days represents Israel in the great tribulation. These are just some of the reasons we know Israel is at the center of God's plan. The present, predominantly Gentile church and the doctrines concerning it were a mystery unknown to the Jews throughout the first 69 weeks. We therefore must be removed prior to the beginning of the 70th week, which is determined upon the nation of Israel (Daniel 9:24).

3. The tabernacle of David: Referring to Peter's visit to the house of Cornelius, James said, "... God at the first did visit the Gentiles, to take out of them a people for his name. And to this agree the words of the prophets; as it is written, After this I will return, and will build again the tabernacle of David, which is fallen down ..." (Acts 15:14-16). After what? After God takes out of the Gentiles "a people for his name" (Christians). Of course there are some Jews mixed in, for there is no difference within the present Church. Thus, the filling of the Church must be completed prior to the rebuilding of the temple, which is prior to the midpoint of the tribulation (Daniel 9:27 and 2 Thessalonians 2:4). Also, we see that once God is through calling out a people for His name from among the Gentiles, He will return His attention back to Israel, rebuilding the temple. Prior to this, the believers in this age must be removed from the scene, being caught up into heaven.

4. The fulness of the Gentiles: After discussing the analogy of the good olive tree and the wild olive tree, Paul reveals the mystery in Romans 11:25-26, "For I would not, brethren, that ye should be ignorant of this mystery, lest ye should be wise in your own conceits; that blindness in part is happened to Israel, until the fulness of the Gentiles be come in. And so all Israel shall be saved ...." Once again we see that it is not until after the last Gentile becomes a Christian that God resumes his program with the nation of Israel.

5. We do not know the day of the rapture. We will not know the date, but we are told to watch (1 Thessalonians 5:2 and 6) and know the general time of the end. There is no warning for the rapture. It could literally happen at any time. However, Daniel 9:27 tells us that the second coming is seven years after the Antichrist makes his covenant with Israel, and three and a half years after he breaks the covenant. Christians cannot be left on earth during the whole tribulation or even the first half, because we would know the exact date of the rapture, contradicting scripture. If the post-tribulationists or mid-tribulationists were correct, we would have a seven year or three and one half year notification before the rapture.

6. The wrath of God: All three pre-millennial views, post-tribulationists, mid-tribulationists, and pre-tribulationists agree that Christians will not suffer the wrath of God as explained in 1 Thessalonians 5:9. However, the plagues of the seven seals, seven trumpets, and seven bowls are on a global scale. Also, remember the verses about the conquered saints previously mentioned in the post-tribulational discussion. Since the church is not appointed to wrath, it cannot be present when these global plagues come upon all those that dwell on the earth. Evidence of the tribulation being the wrath of God can be seen in Revelation 6:16-17 which says, "And said to the mountains and rocks, Fall on us, and hide us from the face of him that sitteth on the throne, and from the wrath of the Lamb: For the great day of his wrath is come; and who shall be able to stand?" Other passages on the wrath of God include Revelation 11:16-18, 14:10, 14:19, 15:1, 15:7, 16:1, 16:19, and 19:15.

7. The Holy Spirit: Paul told the Thessalonians, "And now ye know what withholdeth that he might be revealed in his time. For the mystery of iniquity doth already work: only he who now letteth will let (hinder), until he be taken out of the way" (2 Thessalonians 2:6-7). Who do the Thessalonians know that is powerful enough to hold back Satan? This has to be the Holy Spirit. Before the tribulation, God will catch away all Christians (in whom the Holy Spirit dwells) and He will also remove His hand from the powers of evil in this world, making way for the great deception and the kingdom of the AntiChrist. The Holy Spirit will begin operating in a manner that is more like Old Testament times, unlike the manner in which He operates today. He will not indwell believers again until Jesus Christ returns at the end of the tribulation, with these two exceptions: He will be the seal on the 144,000 young men of Israel (Revelation 7:1-8), who will be preaching the gospel of the kingdom throughout the world, and He will fill the two witnesses in (Revelation 11:3-4).

8. Believers pleading for vengeance: The slain saints of the tribulation plead for vengeance in Revelation 6:10, "And they cried with a loud voice, saying, How long, O Lord, holy and true, dost thou not judge and avenge our blood on them that dwell on the earth?" Contrast this with the martyr Stephen's last words: "... Lord, lay not this sin to their charge ..." (Acts 7:60). This attitude of vengeance is not a characteristic of those indwelt by the Holy Spirit. Unlike the believers today, these Revelation 6 believers are not indwelt by the Holy Spirit. Besides, Christians who have studied God's Word would not have to ask "How long?" They would already know, as was described in the "We do not know the day of the rapture" discussion above.

Some may disagree with some of the points made in this article. In most cases, the disagreement on end times prophecy is only a symptom. The real source of the differing views is a disagreement over how to rightly divide the Word of God. Understanding the difference between the "kingdom" program for Israel and the "grace" program for us is the key. Learning these truths is of utmost importance in understanding not only end times prophecy, but many other areas of Christian doctrine as well. For more on rightly dividing the Word, see the articles, "The Basics of Understanding the Bible" and "Israel's Kingdom Gospel and Our Grace Gospel" at www.matthewmcgee.org. Grace be with you...

Please be in prayer for the family of our long-time book printer/binder and friend, Larry Sanders. Larry and his wife, Jackie, were instrumental in getting the books in to print 25 years ago and have been involved in book production in one form or another since that time. When we first started writing this newsletter, the request was going to be for his health since he had been battling cancer for the past several months. Unfortunately, Larry lost his battle on June 5th. We know our Lord’s ways are higher than our own, but we ask that you remember his family, particularly Jackie as she struggles with the loss and financial burden that comes from prolonged medical treatment.

Back to contents page